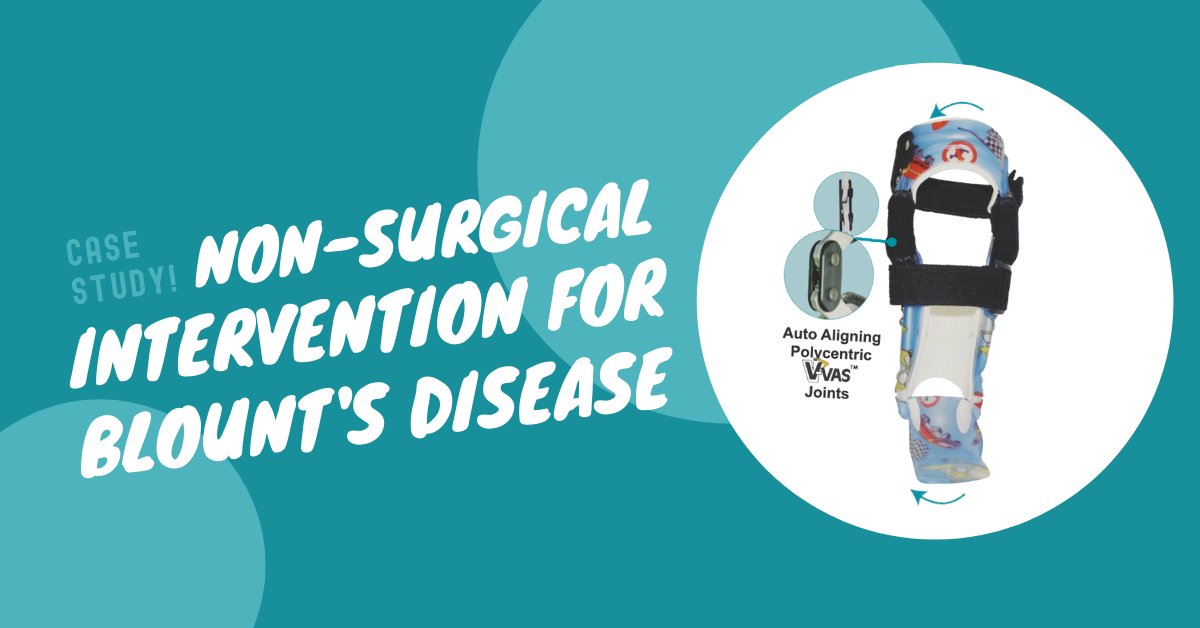 Blount's disease, also known as tibia vara, is a rare growth disorder that affects children, causing the legs to bow outward just below the knees. A small amount of bowing is normal in young infants. However, their legs usually straighten out as they begin to walk.

For children with Blount's disease, the lower legs remain bowed or bow further outward, leading to future walking complications. Blount's can be present in children less than 4 years old as well as in early adolescents. Nearly all children who receive early treatment respond very well to intervention.

The treatment of Blount's disease ranges from simple observation to surgery, which can be avoided in many cases. In this article, we share the benefits of using the Pediatric KAFO brace as a non-surgical treatment option for Blount's disease, how it works, potential pediatric applications and an overview of results from a case study.

A unique KAFO brace can be custom fabricated for younger patients who present or require treatment for Blount’s disease, Rickets, Bow Leg, Knocked Kneed and other skeletal malalignments of the lower extremity. The dynamic V-VAS™ joint system allows for sequential correction of the deformity and allows for the accommodation of growth.

Patient compliance is not an issue due to the auto-aligning, free-motion polycentric knee joint capabilities that have the ability to isolate measured tibiofemoral alignment in 2 and 4-degree increments.

The Pediatric KAFO brace is the only system that creates a bending moment that maintains the four-point correction throughout the full range of knee motion. The Pediatric KAFO brace design is adaptable to incorporate a medial or lateral Step lock or Drop lock joint opposite of the V-VAS™ joint to simplify straightening adjustment and increase knee stability if needed.

This orthosis is commonly used for the treatment of:

The Pediatric KAFO Brace can be custom fabricated by experienced technicians to significantly reduce fitting and follow-up time. Other important features of the product include:

The following study reports the results of using a custom-made Pediatric KAFO brace as an alternative to surgical intervention for Blount’s disease.

Non-surgical treatment of Blount’s disease has been somewhat controversial, primarily because compliance has been an issue in the locked knee designs due to the altered gait pattern and overall perception of being impractical.

Past studies have shown some degree of success using a drop lock or solid upright KAFO variation. A more recent study has shown a high rate of spontaneous correction when varying stages of severity-specific Blount’s disease are present. Other risk factors related to failure include obesity, varus thrust and orthotic application at an age older than 3.

Maximizing results when managing bowing deformities of the lower limb can be traced to establishing the proper diagnosis, age appropriateness, and progression of the deformity.  Differential diagnosis is based on multiple factors and is essential in determining the likelihood of deformity progression and orthotic outcome.

The factors include a family history of obesity, ethnicity, varus thrust, radiographic measures, deformity stage, and unilateral vs. bilateral involvement. Patient A was an obese male originally fitted with a traditional Double Solid Upright KAFO (DSUK) design, then transitioned to a new design. This new design, the V-VAS™ (Varum Valgum Adjustable Stress joint system Blount’s KAFO (VVASBK) was chosen due to lack of compliance and associated deformity progression after being treated with the DSUK for 17 months.

Patient B was fitted with the custom VVASBK for orthotic management from the beginning of treatment. Initially, the orthotist recommended a traditional SSUK design because of previous success and familiarity with the product. In doing so, the pediatric orthopedist intervened, preferring not to use the DSUK design due to a concern for the patient being non-compliant. The orthotist and pediatric orthopedist decided to proceed with the new hinged double upright free motion knee VVASBK. The decision to use the VVASBK vs. any other design was because of the joint design and other associated benefits including, ease in adjustability and posterior opening cuff designs.

Patient A’s initial X-ray confirmed the diagnosis of Blount’s disease with varus thrust. He was referred to the local orthotist for measurement and eventual fitting. Orthotic treatment was initiated at the age of 2 and continued through the age of 5 + 4.

At the age of 2 + 5, a follow-up radiograph was obtained and the DSUK was discontinued due to compliance issues and consideration of the potential likelihood of spontaneous correction or surgical treatment.

New radiographs were obtained at the age of 3 + 4 years or nine months after the previous visit, revealing recurring deformity due to non-compliance specific to not wearing the DSUK’s. During the same visit, the doctor consulted with the orthotist and decided to proceed with the VVASBK.

Patient B is a non-obese, Caucasian male whose initial X-ray confirmed the diagnosis of Blount’s disease stage 2 with varus thrust.  He was referred to the local orthotist for measurement and fabrication. At 1 + 11 years of age, radiographic evidence of deformity progression was confirmed.

The team responsible for treating Patient B decided to discontinue the VVASBK at that time and follow-up in 9 months. A radiograph was obtained at the 19-month follow-up (wore VVASBK for 10 months, then discontinued for 9 months), validating successful treatment using the VVASBK. Orthotic management with Drop Lock or solid upright designs has been successfully used as a treatment method for Blount’s disease and other bowing deformities in the lower limb. The success rate has ranged from 50 percent to 90 percent without recurrence. A commonly prescribed single solid upright design has shown after a 5.9-year follow-up that of those with unilateral involvement, 6 percent went on to have surgery, while 70 percent of those bilaterally involved went on to surgery.

This study confirms that the unique design of the V-VAS™ Joint System, associated features of the VVASBK and the significant improvement in compliance associated with this specific design has resulted in the optimal outcomes in the treatment of typical and atypical patients with Blount's disease.

Further study with a larger number of patients and long-term research would be necessary to further validate the findings of this analysis. The VVASBK is a new and effective way of non-invasively managing traditional and non-traditional lower extremity bowing deformities and should be a primary consideration when treating such conditions.